As featured in E&P Magazine.

Fire is the worst thing that can happen to an oil & natural gas collection site. All the time, effort, and resources dedicated to a good pad can literally go up in smoke in minutes, as was the case in Monroe County, Ohio. In this instance, there were thankfully no injuries, but there was a total loss of surface equipment (which estimates put at tens of millions), a temporary evacuation of local residents, and a fish kill in a nearby creek that is being investigated for ties to the fire. Thus far the Environmental Protection Agency, the Ohio Environmental Protection Agency, and the Ohio Department of Natural Resource have been involved in the investigation process.

The fire at the Eisenbarth property was so hot that first responders had to fall back and allow the flames to die down before they could mount a successful firefighting effort. Clearly, site personnel was not able to fight the fire themselves. Even if they could have maneuvered into position quickly enough, which is questionable, they would not have had enough firefighting agent on hand with only handheld portable extinguishers at their disposal. Once the fire became established, tankers filled with water from a nearby river had to be brought to the site in support.

But, even if they had the resources, the dangerous nature of a congested fracing spread makes it inadvisable for anyone other than a trained, professional firefighter to make the attempt. Fortunately, the wells themselves were not involved in this instance. Had they been, the entire situation likely would have been far worse, as other thermal events over the years have shown. Even so, with just the surface equipment involved, eight regional fire departments were needed to fight the conflagration.

The well’s operating company has stated on its website that the fire was caused by a “mechanical problem with hydraulic tubing.” This explanation strongly suggests that the fire was the result of a compromised hydraulic fluid line spraying atomized liquid onto a hot machine surface. This is known to be the single most common cause of fires on mobile heavy-duty equipment within the mining industry, which utilizes engines of similar type and size as those used on hydraulic fracturing equipment. This sort of fire is not at all unusual in mining, which is a major reason why the industry embraced the use of vehicle fire suppression systems over 20 years ago.

A vehicle fire suppression system is a pre-engineered safety accessory that is permanently mounted to a piece of mobile equipment. Its sensors automatically actuate the system whenever temperatures are reached indicating fire. Its nozzles are positioned to attack fires at their most common starting points. This means that the vehicle is protected at all times, whether supervised or not, which is important when considering the long hours that industrial equipment is typically run. 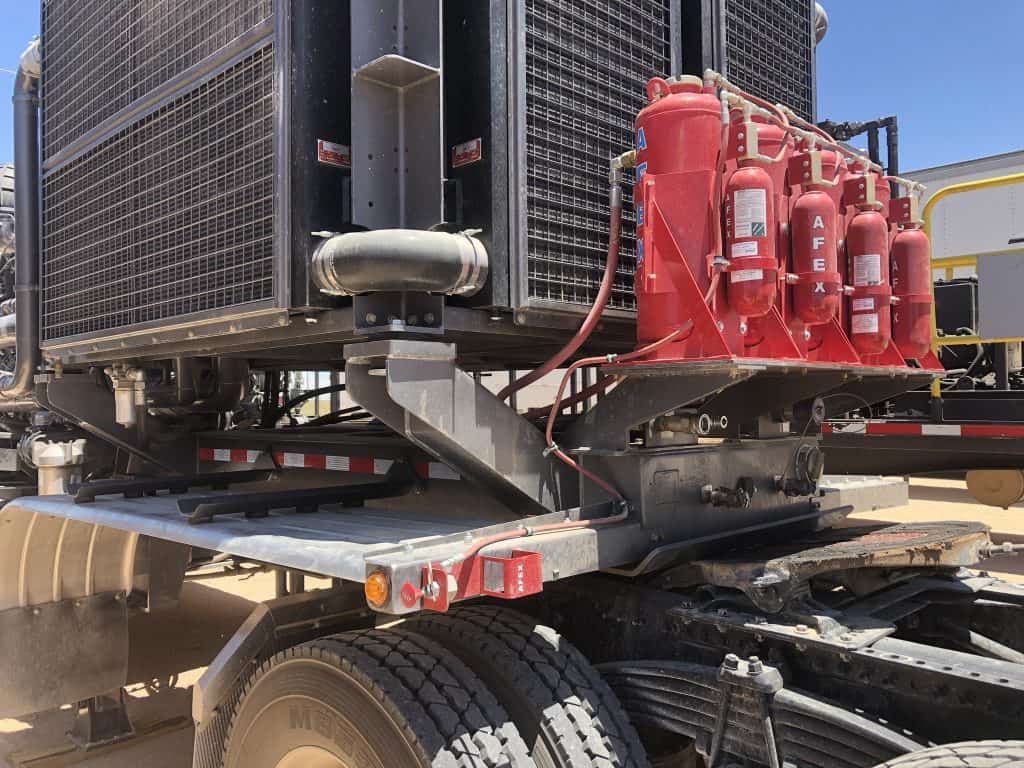 Advanced systems are designed for remote-controlled firing. This is a desirable feature due to the tight quarters typical of a site being hydraulically fractured as it keeps personnel from having to move towards a burning vehicle to actuate the manual override on the system. Once a system is activated, the machine’s engine can be set to automatically shut down. This keeps additional fluids from being pumped onto the fire, as well as stops any cooling fans, which otherwise might encourage a blaze. This is a critical step in suppressing a vehicle fire. 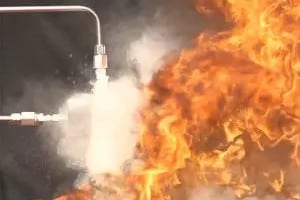 Generally, vehicle fire suppression systems are designed to combat a fire as quickly as possible. Accordingly, the material most commonly used in systems is an A:B:C dry chemical powder that features a very fast knockdown, essentially choking the fire before it can become fully engaged. In addition, a liquid firefighting agent can be used which will cool hot surfaces as well as suppress flame. This significantly reduces the risk of fire reflashing. A dual agent system that uses both dry and liquid agents is appropriate for a hydraulic fracturing application since these vehicles have very large engines with many hot surfaces and large volumes of highly flammable liquids and materials.

The fire suppression systems that are selected to protect mobile heavy-duty equipment must be robust and purpose-built, and the manufacturer should have experience providing solutions in demanding work environments. Take public transportation buses as an example. They use fire suppression systems, but the light-duty products appropriate for them are not rugged enough to withstand the rigors of long hours of operation at high temperatures, constant vibration, and significant flexing and twisting of the platform. These factors all impact a fire suppression system’s components over time, which is why they need to be as sturdy as possible.

Other industries besides mining have fully embraced rugged vehicle systems as well, going back 50 years to when the technology got its start. The forestry and solid waste industries are traditional users, as are the military, paper mills, and steel mills. Also protected are chippers and grinders in the wood processing arena, which are the closest match to fracing trucks since they have similar chassis and utilize very large, powerful engines that run hot. 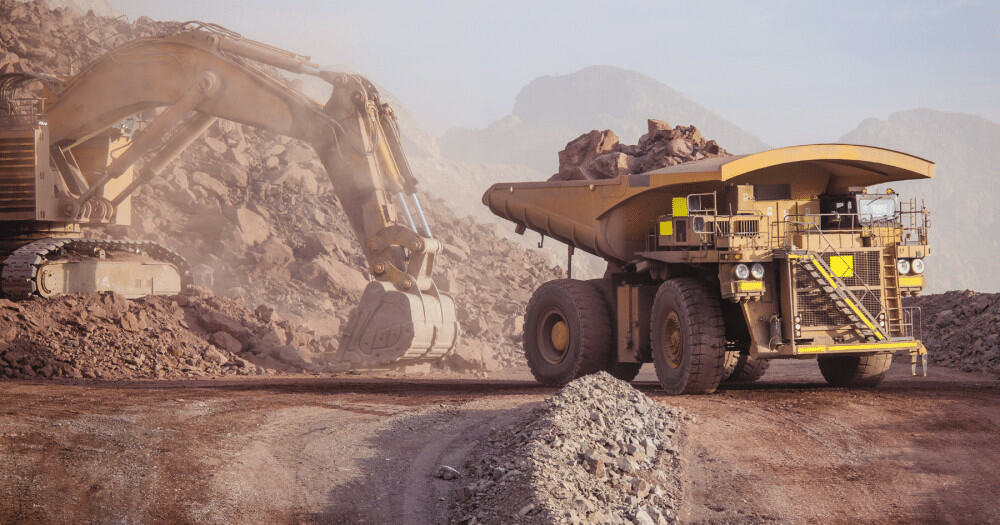 Within the oil and gas industry, fire suppression on offshore rigs is known to be serious business. But this attitude towards land-based mobile equipment, despite all the known risks, for some reason has yet to be widely adopted. However, there is a growing sense across the industry that this is about to change as OEM’s and end users alike engage in conversations about the value of vehicle fire suppression systems. Incidents like the one referenced above are understandably accelerating the process. 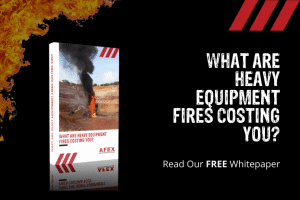 The downside of fracing equipment fires is so severe that all stakeholders surely must agree that doing everything possible to mitigate them is desirable. Besides the exceedingly high cost of replacing burned equipment, there is the loss of profits from the lost fleet to consider. And a service provider must take into account the potential impact any fires will have on its ability to secure future business.

Whether it be in actual dollars spent or in the form of damage done to a company’s reputation, crisis management has significant costs also. This past February, when a company provided free pizza vouchers to those impacted by its four-day-long well fire near Bobtown, Pennsylvania, the overall reaction was largely one of derision. This obviously was not the intention of the outreach program, but there are bound to be negative responses to any public relations campaigns, no matter how well-meaning, in a climate that has such a vocal anti-fracing contingent. Prevention is therefore the best proactive strategy when managing such a volatile topic in the court of public opinion.

Safeguarding personnel and the environment, protecting investments made in expensive machines, and keeping profits flowing are all valid reasons for investing in fire suppression systems. On top of these, mitigating bad publicity is another factor to consider. And finally, as an industry under the microscope of constant scrutiny, where the slightest slip-up is amplified, no company wants to be in the position where it could be accused of having been able to do more to avert a tragedy. With so much at stake, it would seem that this reason alone is all that would be needed for most concerned organizations to take a hard look at vehicle fire suppression systems.

158 comments In This Topic: