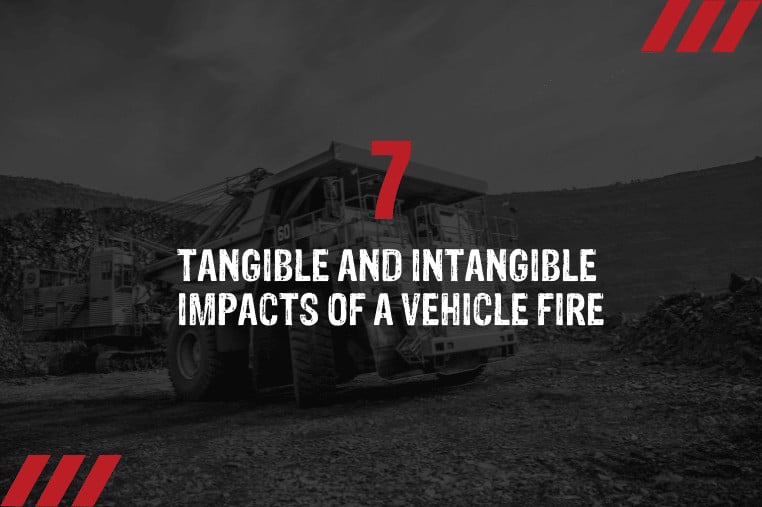 When it comes to a heavy-duty mobile equipment asset catching fire, there are a range of resulting impacts - and all are devastating to an operation. A small fire that goes unnoticed can rapidly engulf an entire machine and lead to a total loss. So, what are some of the tangible and intangible impacts of a vehicle fire?

END_OF_DOCUMENT_TOKEN_TO_BE_REPLACED 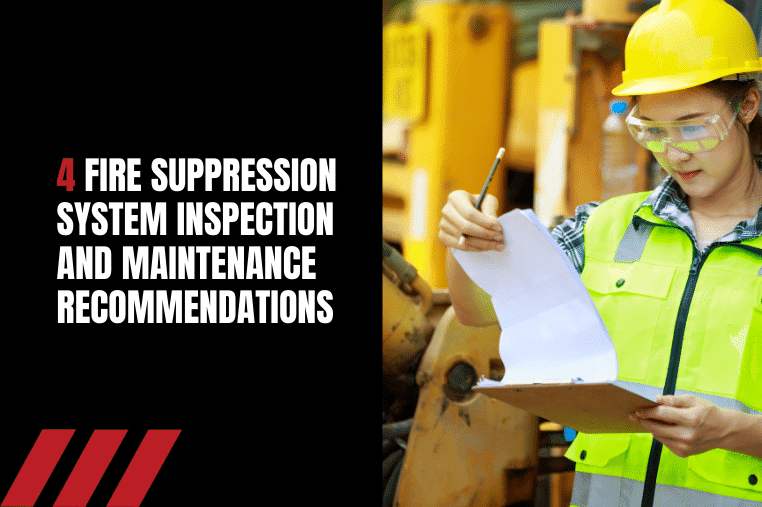 Fire suppression systems are the first line of defense against heavy-duty mobile equipment fires and the associated risks. And, to ensure these systems work as intended, regular maintenance is a requirement. Failure to properly maintain a fire suppression system can result in excessive wear and tear on components, which can ultimately render a system ineffective. So, what does fire suppression system maintenance involve? Let’s explore four key recommendations. These recommendations come directly from the National Fire Protection Association (NFPA) and system manufacturers.

END_OF_DOCUMENT_TOKEN_TO_BE_REPLACED

The heavy-duty mobile equipment used in a variety of industrial applications, such as mining and forestry, operate for long hours under harsh conditions. And equipment owners are accustomed to performing routine maintenance to keep their investments working at maximum efficiency. However, when it comes to a tried-and-true safety accessory for heavy equipment, fire suppression systems, maintenance is often overlooked or underestimated.

Is maintenance on fire suppression systems really necessary? What could happen if routine inspections and maintenance are neglected?

END_OF_DOCUMENT_TOKEN_TO_BE_REPLACED 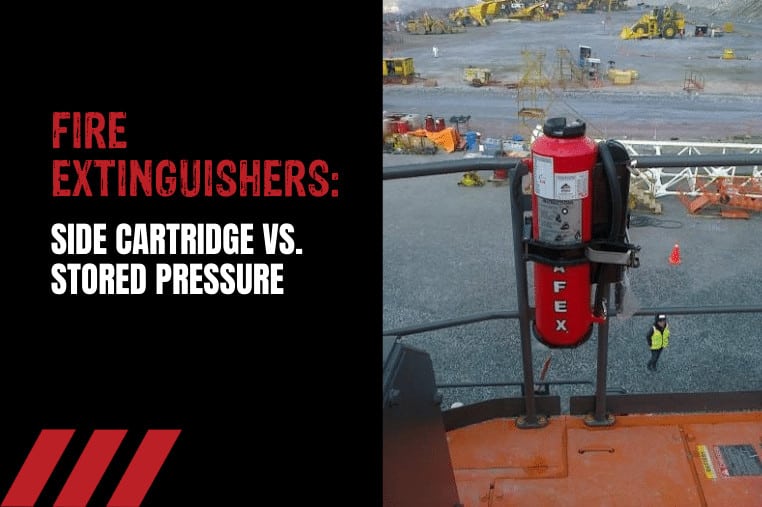 You're in the market for a portable fire extinguisher as a means of egress for your heavy-duty mobile equipment operators. So, what's the difference between a stored pressure and side cartridge operated fire extinguisher? This article will walk through some frequently asked questions to help you make the right decision for your application.

Stored pressure extinguishers have the compressed nitrogen gas that is used as the propellant for the dry chemical agent stored in the same canister as the dry chemical.

Side cartridge operated units store the dry chemical in a non-pressurized container and the compressed nitrogen gas in a separate cartridge. Only at the time of actuation is the extinguisher under pressure and then, only briefly.

END_OF_DOCUMENT_TOKEN_TO_BE_REPLACED

As featured in Construction Equipment Guide.

AFEX pioneered automatic fire suppression systems in the late 1960's in response to the fire risks associated with timber harvesting equipment in the Southeastern United States. Today, AFEX systems can be found on all seven continents protecting equipment in all heavy industries including waste handling, mining, oil and gas, and steel.

AFEX is different from other fire protection companies in that vehicle systems are the company's sole focus. As such, the systems are designed with vehicles in mind from the ground up. This specialist position enables AFEX to stay abreast of changes in the industry, and to be the first to respond to the needs of equipment owners and operators.

END_OF_DOCUMENT_TOKEN_TO_BE_REPLACED

As featured in SWANA Florida's Summer 2017 edition of Talking Trash.

Fire puts operators in danger, leads to costly machine repairs or replacement, and lost productivity due to downtime. The vehicle fire suppression industry is based on these simple facts, but how do you choose the best solution for your unique needs?

The following considerations are a good starting point for anyone looking to protect heavy equipment.

END_OF_DOCUMENT_TOKEN_TO_BE_REPLACED

As featured in E&P Magazine.

Fire is the worst thing that can happen to an oil & natural gas collection site. All the time, effort, and resources dedicated to a good pad can literally go up in smoke in minutes, as was the case in Monroe County, Ohio. In this instance, there were thankfully no injuries, but there was a total loss of surface equipment (which estimates put at tens of millions), a temporary evacuation of local residents, and a fish kill in a nearby creek that is being investigated for ties to the fire. Thus far the Environmental Protection Agency, the Ohio Environmental Protection Agency, and the Ohio Department of Natural Resource have been involved in the investigation process.

END_OF_DOCUMENT_TOKEN_TO_BE_REPLACED 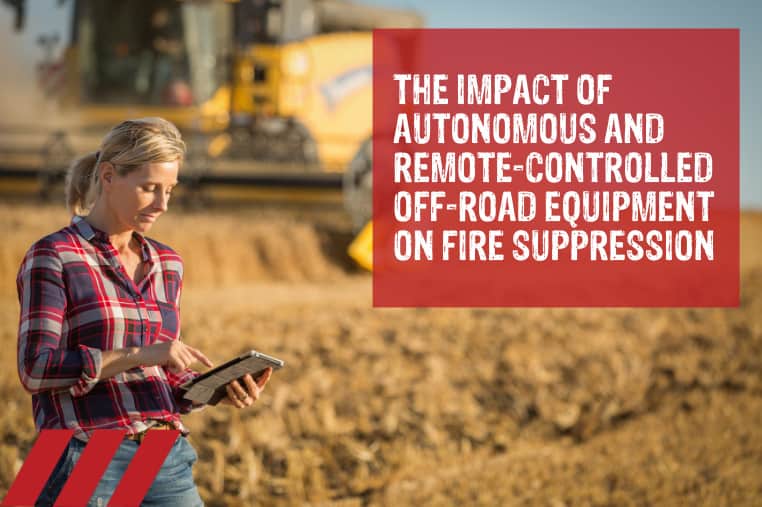 The advent of unmanned equipment in heavy industries has arrived, and so manufacturers of fire suppression systems need to address how this impacts the type of coverage these units receive. Whether a machine is used in mining, timber, recycling or some other niche, this new (and growing) paradigm requires a modified approach when it comes to fire protection.

Because the human factor is largely being removed from the firefighting equation as a result of this conversion process, the opportunities for an in cab operator to identify a fire and manually actuate a fire suppression system on the vehicle itself are all but gone. Fortunately, fire liability is not drastically increased by going the unmanned route, assuming those responsible for overseeing the vehicles have the ability to actuate the system from a distance.

END_OF_DOCUMENT_TOKEN_TO_BE_REPLACED

As featured in Mining Magazine.

When determining how best to protect a piece of heavy off-road equipment from the threat of fire, a Fire Risk Assessment is the most indispensable procedure one can use. This process entails an evaluation of the main hazards of a specific machine and its operating environment. The assessment provides a decision-making framework to help one evaluate a vehicle's risk potential, implement changes to mitigate those risks, and, when deemed necessary, to design and install a fire suppression system that appropriately addresses those risks. It is so helpful, the US National Fire Protection Association (NFPA) has a guide to explain and encourage its use.

END_OF_DOCUMENT_TOKEN_TO_BE_REPLACED

As published in the magazine: The American Oil & Gas Reporter

From North Dakota to Ohio to Louisiana and Texas, wherever hydraulic fracturing is being done there have been fire incidents over the years which have resulted in total surface equipment loss. The bottom line cost of such “thermal events” is generally in the tens of millions, which is to say nothing of productivity losses and any associated public relations damage done to the affected stakeholders. All things considered, adding fire suppression systems to at-risk machinery is a safe and cost effective solution to this potentially devastating problem.

A vehicle fire suppression system is a safety accessory that is mounted on a piece of machinery, such as a pump or blender, to protect it in the event of a fire. Comprised of tanks filled with fire-fighting agent, fire-detecting sensors, and a distribution network of tubes, hoses and nozzles, it is permanently affixed to the machine. In the oil & gas industry, these systems are appropriate for use on the vehicles used in hydraulic fracturing and on any diesel generators used on site.